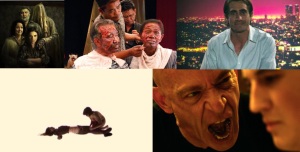 The following are movies from the last few years which, in spite of plaudits and awards, may not have received the media attention and box office they deserved. If you missed them, they are worth checking out.

Even the presence of a nude Scarlett Johansson didn’t prevent this little gem falling under many moviegoers’ radars. Jonathan Glazer brings his sumptuous visual style, previously used to great effect in numerous advertisements and music videos for the likes of Radiohead, Blur, Unkle and Bjork, to this tale of an alien being and her rather gruesome role on Earth. The beauty of Glazer’s trademark visual gloss, the slow build and the pared-down dialogue do not distract from the building of empathy for the central character. This is made possible by Johansson, who gives one of her best performances, supported by the natural demeanour of the Glaswegian extras, many of whom were not even aware of the presence of the director’s camera.

The Act of Killing (Joshua Oppenheimer, 2012)

This documentary is a disturbing and claustrophobic examination of Indonesia’s anti-Communist cull of the 1960s through the eyes of its perpetrators. Having escaped prosecution, and with many still in positions of power, these murderers and torturers excitedly recreate their deeds as Hollywood-esque film productions. We are presented with how these men see themselves and their actions; from Don Corleone-type gang bosses, to war heroes, to, bizarrely, choreographers of glamourously camp dance numbers. These mini-movies, interspersed with moments of realisation from the killers, are not a comfortable watch but are a fascinating journey into the heart of darkness.

Another movie of claustrophobic darkness, Nightcrawler highlights the commodification of death and suffering in today’s news media. Jake Gyllenhaal puts in a creepily riveting performance as Lou, who spouts self-help philosophy and business-speak on his road to becoming a self-made man; a capitalist society success story. He does this as a freelance news photographer, driven by the mantra, “if it bleeds, it leads”, a creature of the night chasing misery. Propelled by excellent performances, a sharp script and exquisite cinematography, this movie forces us to examine not only the motivation of those producing these voyeuristic, schadenfroh reports but our own complicity in driving the market for them.

J.K.Simmons swept the awards boards earlier this year for his performance as Fletcher, the relentless, sharp-tongued music coach in this movie about success, talent, rivalry and ambition. Simmon’s trophies were well-deserved as he gives a stunning representation of a man driven towards brilliance attempting to extract it from others. However, this movie deserves more attention than that given to its lead performance. Miles Teller as Andrew, a determined and self-absorbed student, is also fantastic and the foundation of both performances is the bristling, electric dialogue of writer-director Chazelle’s script. Even those who are not lovers of jazz will still find much to appreciate in this classy, character-driven piece of cinema.

New Zealand has produced a string of quirky horror-comedies over the years, from Peter Jackson gorefests Braindead and Bad Taste, to Black Sheep and more recently the vampire satire What We Do In The Shadows. Housebound was a classy little addition to the genre which deserved more attention than it received, perhaps suffering from a release date close to that of higher profile Taika Waititi’s vampire romp. Gerard Johnstone’s debut successfully manages to balance its comedic aspects with the tension, giving horror fans satisfying jumps along the way and adding some original twists to the haunted house genre. The cast give strong performances, particularly Rima Te Wiata as the incessantly chattering matriarch, and the production designers create a suitably spooky, labyrinthine setting. New Line studios have picked it up for a US remake (are Kiwi accents that difficult to understand?) but it will be interesting to see if the story succeeds without the low-key Kiwi everydayness and laid-back humour.

One thought on “5 Movies You May Have Missed”