The journal The Molotov Cocktail recently held a competition entitled Flash Rage, soliciting submissions of less than 1000 words, inspired by the spirit of protest. Although my entry did not make it into the top ten, it was included in their ‘Close but no cigar’ list. My story, below, is called Persistence 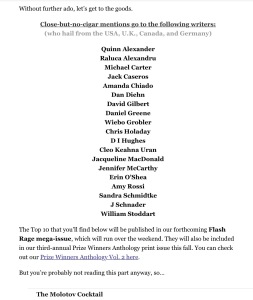 The bitter metal digs into my waist; cold, even through my woollen jacket, my blouse, petticoat and corset. Unrelenting. Bound; here at the seat of power, calling out to those in control. Solid in our cause, singing in unison. Undeterred.

With the shrill scream of whistles and the thud of weighty feet, the uniforms arrive. Bolt-cutters in hand, the chains snap as they are severed. My boots scrape on the kerbstones as we’re dragged into the road, unsilenced.

The bitter metal digs into my wrists. He spits in my ear.

The bile-green walls close in on me. Encased behind impenetrable doors and frosty barred windows. Antiseptic odours fused with faeces. Tormented cries echo down to me along sterile corridors, and my brain screams in reply. They have told me this is for my own good. They don’t want me to cause myself harm. Who knows what I might do in my next, hysterical attack.

Skinny little legs protruding from shorts. A bulky satchel bowing him over like a man five times his age. It is brimming with knowledge: formulas and dates and capital cities, explorers and discoveries, stories and ideas and truth. Overflowing with opportunity.

Our mother hands him a metal lunchbox, then prods him out the door. I watch him as he trudges reluctantly up the path, looks back forlornly, then disappears along the lane.

“How many times do I have to tell you? It’s just not possible, not for you.”

Grandma’s gift is scrunched in my clammy little palm. So many choices, such an important decision. I stare down at the banknote, then back at the plastic children on the dais ahead. A confusing array under hot lights: floral dresses, lace-trimmed socks, pretty ribbons, caps, sporty shorts, checked shirts, tidy little suits with waistcoats. Mum nudges me.

I point to a blue t-shirt, baggy and emblazoned with a team logo. Mum smiles but shakes her head.

“What happens if I don’t want it?” I mumble.

His face blanches, the stupid grin transforming into a sneer.

“Well, if that’s the case,” he sighs deeply “we can look into adoption.”

“And termination?”, my voice barely audible.

“Elsewhere that may be possible, but that is most definitely not an option for you here.” His cold eyes penetrating. “Absolutely not going to happen.”

“Take the offer,” she urges.

An offer of anonymity; for him. A slap on the wrist and affirmation that it was merely a momentary lapse in judgement. An alcohol-induced slip up. But I want justice. I want everyone to see the bruises on my body, the dirt in my hair, to taste the bile of fear with his hands on my throat, to feel the burn as he shoves inside. I want him to share my humiliation, my suffering. I want people to judge him, just like they judge me now. The lawyer shakes her head.

“I must advise you, a victory in court, a custodial sentence, those are highly unlikely to happen.”

A whirling maelstrom of ideas and opinions perpetually circling the globe. Idealistically, naively, I had added my voice. A critical analysis of a game, a questioning of the status quo; pounced upon by self-appointed gatekeepers protecting their exclusive domain. A coordinated defence mounted; a multi-fronted attack. Weaponised sharing, multiplying exponentially.

“What do you know about it bitch? Get back to the kitchen!”

“You and your opinions can fuck off and die!”

“Don’t block me snowflake. Get off the Internet if you can’t take it. Stop being a victim.”

“Think we’re going to take advice from a cunt? Never going to happen!”

November 2016
I can withstand the criticism, the whispered innuendo, the outright attacks, the blatant lies. Because I know I’m right. I have worked a lifetime dedicated to the craft. I am qualified, experienced, professional. I have proven myself capable at every turn. I have fought and won endless battles and I deserve this opportunity.

And my competition? A slapdash novice, unversed in complexity and subtlety. A foul-mouthed bullying abuser; a proven incompetent who has bluffed and wheedled and golfed his way upwards. It should be a cinch. It should be mine.

In the bitingly cold air, our breath condenses in a haze, hovering overhead. We are a sea of pink wooly hats rolling unrelentingly into the distance, stretching on towards the seat of power. We have communicated, coordinated, united and now gathered in our thousands, tens of thousands. We raise a rallying cry, our voices united in our demand for control; control of our own opinions, our own choices, our own education, our own careers, our own participation, our own appearance, our own bodies. Undeterred, unsilenced, we march onwards.

We have been warned.

We have been given explanations.