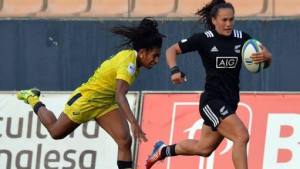 The lightning pace, the strength and stamina of the athletes, the skills involved in handling and kicking an inherently unruly and unpredictable ball, the short game time and swift turnaround allowing for multiple teams to compete in a single competition, and the creative costumes and carnival atmosphere in the stands, all make rugby sevens a highly entertaining sport.

The seven-player game dates back to the 1880s in Melrose, Scotland but it took until 1973 for the first officially sanctioned international sevens competition to be held, at Murrayfield in Edinburgh. Shortly after, in 1976, the Hong Kong tournament was initiated, then the Rugby World Cup Sevens was first contested in 1993 and the annual Rugby Sevens World Series in 1999. The women’s sevens game also slowly gained popularity and recognition through the years, being included at the Hong Kong tournament from 1997. The inaugural Women’s Rugby World Cup Sevens was held in 2009, and in 2012 they joined the Sevens World Series. Both men and women competed when sevens was introduced to the Olympics in Rio in 2016, and the women joined the men for the first time at the Commonwealth Games this month on the Gold Coast, Australia.

While women’s presence at these competitions is excellent progress, they are still often seen as the second string to the men’s matches, as dictated by the usual format of the tournament. In the case of the Sevens World Series, the women’s teams do not compete in all the locations where the men’s contests are held. When the women do share a venue with the men, they are generally scheduled to play all their games on the first two days of the event, with the men’s matches played afterwards, being seen as the prestigious headliner matches. A similar format was used at the 2016 Rio Olympics. However, there are signs that this could be changing and Australia are leading the way. At the Sevens World Series event in Sydney this January, the men’s and women’s games were interspersed throughout the weekend, at each stage of the competition, with the women’s and men’s finals being played consecutively on the final evening. This format was replicated last weekend during the Commonwealth Games on the Gold Coast. This makes a lot of sense practically in terms of giving players longer rests between matches, but also is a great boost in exposure for the women’s games, allowing a larger audience to appreciate that the level of skill with which the women play the game, and the excitement and entertainment value, is equal to that of the men’s game. It can only be hoped that the other series venues see the value of this format and follow suit. Unfortunately, this year the New Zealand Rugby Union, who prides itself as the spiritual home of all things rugby, neglected to even hold a women’s sevens competition at the Hamilton Sevens World Series event, citing funding limitations. This was a very disappointing decision and one which NZ rugby superstar and try scoring genius Portia Woodman was quick to condemn.

The Australian Rugby Union are also currently leading the way in support for the women’s XVs game. While other unions, including England, are moving their funding away from the longer game and into sevens, Australia are looking to increase the exposure of women’s XVs. As well as voicing its interest in hosting the 2021 Women’s World Cup, they have established a new domestic competition, the Super W. This coming weekend sees the final of the inaugural Super W, in which five teams representing five states have played in this round robin tournament which has been broadcast by Fox Sport. While there are still ongoing issues surrounding players’ pay for this competition, the ARU, under its new CEO Raelene Castle, is determined that players should all be supported, with access to elite level training and sports science. Meanwhile, other developments are being made in terms of player salaries, with a collective bargaining agreement being reached with the ARU guaranteeing pay parity for sevens players and payment for the women’s national XV squad for the first time. A deal has also been struck in New Zealand for the national squad, the Black Ferns, with 30 women players being offered a base salary and contracts including a maternity policy. Black Fern Kendra Cocksedge, who also performs a development role for Canterbury Rugby, highlighted the importance of the deal in encouraging girls to take up the game and see a viable future in sports.

Interest in women’s rugby is increasing and will continue to do so with further exposure to wider audiences around the world. There has been an increase of 150% since 2013 in the number of girls and women playing the game and globally 25% of all players are now women. Meanwhile, those already playing at the highest level are beginning to receive recognition for their skills and hard work. The Black Ferns, winners of the Women’s World Cup for the 5th time last year, were awarded the 2017 rugby team of the year award, the first women’s team ever to receive the title. While the playing field may not yet be totally level, things are certainly moving in the right direction for women’s rugby and it has an exciting future ahead.