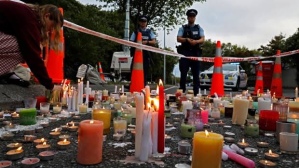 The June 2016 post, “The Value of a Life”, was an examination of expressions of sympathy and outrage following events resulting in the loss of life, contrasted with actions taken by individuals, companies and governments who prioritise their own gains over the lives of others. Examples of deadly disregard for life in that piece included international support for the devastating war in Yemen, the concealment of scientific evidence of harm by the tobacco and fossil fuel industries, and the lack of action to prevent the deaths of asylum seekers in the Mediterranean. Countless more examples of callous policy and behaviour have occurred since the original piece: government policies resulting in deaths and suicide attempts at Australian-run offshore immigration centres and the separation of migrant children from their families detained at the southern US border; the total disregard for the residents of low-lying and vulnerable nations in the face of the climate emergency, with nations and industries unwilling to change their practices or endanger their own profits; weapon manufacturers lobbying against any form of gun regulation against a backdrop of frequent mass shootings and terror attacks.

Following high-profile cases of tragic loss of life, there are public outpourings of grief and calls for change, expressions of sympathy flood social media, flowers and money are donated, candle-lit vigils are held and politicians promise to take action. However, in today’s constantly moving news cycle, the initial shock and outrage quickly blunt as time passes and other issues come to the fore. While ‘thoughts and prayers’ may be plentiful, without constant public pressure the political will to deal with the underlying problems is limited and real efforts to bring about positive change have been lacking.

A white supremacist terrorist attacked two mosques in Christchurch, Aoteroa-New Zealand this March, killing 51 people. The immediate aftermath saw a huge outpouring of public grief and solidarity with the country’s Muslim population, including donations to victim-support funds and multi-denominational vigils held around the country. Images of Prime Minister Jacinda Adern comforting the families of victims flashed around the world. The Prime Minister’s message to the Muslim community, “You are us”, became a rallying cry and many other New Zealanders took comfort in the assertion that, “This is not us”, firm in the conviction that the country is a welcoming beacon of equality. This raised questions about this utopian vision of the nation, with a conversation being initiated, asking for a deeper examination of the country’s colonial past and treatment of the Maori people and current outcomes for the indigenous community, as well as its history of racist attacks against Pacific Island, Asian and Muslim citizens and residents. There were also  calls for the government to review its immigration policy , to end discrimination against those from African and Middle Eastern nations in the quota system. Meanwhile, rugby, for many the heart of New Zealand’s cultural life, also came under scrutiny. The Christchurch-based team in the Super Rugby competition, established in 1996, is called the Crusaders and boasts a logo with a sword-wielding knight and precedes home matches with horse-riding armed knights galloping around the stadium. The name and imagery had been questioned by some in the past but, in the light of a terrorist attack specifically targeting Muslims, the view that the branding was not appropriate gained some momentum. While the club were reluctant to make any immediate changes, they agreed to conduct a full review, including gathering public feedback. Their club statement read; “What we stand for is the opposite of what happened in Christchurch on Friday; our crusade is one for peace, unity, inclusiveness and community spirit. In our view, this is a conversation that we should have and we are taking on board all the feedback that we are receiving, however, we also believe that the time for that is not right now.”

Six months after the attack and the issues of racism, discrimination and the country’s immigration policies have already slipped down the news and out of many’s view. For a while, a spotlight was placed on white supremacy in the country, with charges brought against those who shared the Christchurch attacker’s video and screed, and other racist messages, and the government initiated a gun buy-back scheme to remove semi-automatic firearms from the streets. However, already the political consensus on further gun control is breaking down and many of the questions surrounding systemic racial inequality, discriminatory immigration quotas and the reporting of hate crimes remain unaddressed. Over at the rugby stadium, small changes were promised for the logo, removing the sword by 2020, but the horses returned to the ground after a few weeks (without weapons). Submissions from the public were collected, including many from fans citing the ‘long history’ of the club and a resistance to caving in to politically-correct do-gooders, and in June, the club announced that there would be no name change until at least 2021, if at all. NZ Rugby Chairman Brent Impey explained that, “The reality is that Adidas have got to make jerseys, there’s merchandising and that sort of stuff,” As well as this blatantly financial motivation, Leanne Ross, from the University of Otago’s department of marketing, explained another factor that may have contributed to the decision: “[fans] have extremely sentimental connections to the identity of a team. They feel that identity as themselves, as part of a community and a group.”   So it seems that, in spite of the sentiment that “You are us”, expressing solidarity and inclusiveness between communities, individuals’ own sense of identity and belonging can make it difficult for some to bridge divides. Many white New Zealanders’ national identity is built upon their perception of the country as a fully-integrated, totally accepting nation, and any suggestion that there are deep-seated issues of racial discrimination and violence is just too uncomfortable for some to contemplate. There is no doubt that people were genuinely upset by the horrendous events in Christchurch and really do want a better, safer place for everyone, but when it really comes down to it, many are not actually willing to make any alterations or take any action they see as impacting on their own lives and identities in order to relieve the pain of others.

While it’s easy to express condolences and sympathy following tragic events, how ready are we to actually make changes to our lifestyles in order to help others? Are we willing to really have those difficult conversations about our own positions of privilege and the racism and discrimination in society that we may prefer to discount? How much do organisations and governments rely on the fact that we will forget our outrage and demands for change in a packed news cycle; that we will reach saturation point and lose compassion for others? Do we just accept that those in positions of privilege and power are able to avoid addressing the problems that disadvantage others in order to continue benefiting themselves? The difficulty is sustaining that feeling of injustice we experience on hearing about the loss of life, maintaining that commitment to change, progressing the conversations about injustice and inequity, and keeping pressure on organisations and governments to make the structural changes required; to not forget and move on to the next grim news, while allowing callous disregard for life to continue.

2 thoughts on “Compassion & Commitment to Change: The Value of a Life (Part 2)”