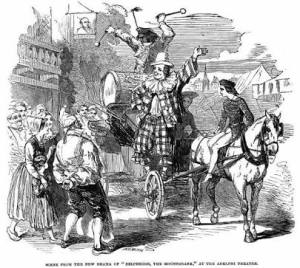 The painted cart rolls into town. A cloud of dust, kicked up by weary horses, and the jangling of tiny bells herald its arrival. Pulling up in front of the stone fountain, brightly-dressed men emerge. The curious townsfolk gather. Drums beat and tambourines jangle. Sparkling hoops tumble through the air, fiery blasts are shot towards rapt observers, objects disappear into velvet cloths only to reappear in a townsman’s grimy pocket, a hard-jawed wooden doll yells bawdy tales at entranced listeners. But these are distractions, a mere prelude to the main act.

A thunderous bang, and from a cloud of smoke he emerges; the weaver of great yarns. His breathless listeners are inextricably reeled in by the wonders of the wide unseen world, death-defying adventures and terrifying tales of mortal plagues bringing about excruciatingly slow deaths. The crowd impelled to the verge of hysteria. “But fear not,” he reassures them, producing a cloudy green bottle from the depths of his patchwork cloak. He presents tidings of wondrous protections and miraculous cures. A voice in the crowd rears up, confirming that, yes, he himself had been returned from the very doors of death by this man’s marvellous medicine. The mob clamours for this extraordinary elixir.

A foolish, unconvinced man in the crowd holds back.
“Don’t be an idiot. Don’t you want to be protected? We certainly don’t want to be infected by you.” He succumbs, parting with hard-earned coins.

In the morning, amidst the hangover of faded euphoria and clearing heads, the townsfolk look to each other with sinking realisation. A mob approaches the square seeking the colourful, flamboyant, mountebank; the charlatan who exploited their fears while bombastically claiming only he held the cure. But, as quickly and suddenly as the travelling show arrived, it has gone.

A new page has been added to the Knothole website.  It is a blog detailing ‘culinary experiences’ with recommendations and potted histories and can be found at Nourishment.