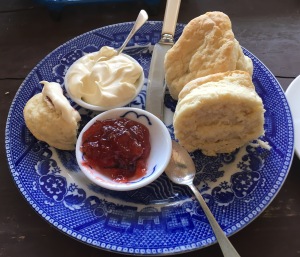 1000 years ago, in Tavistock, Devon, the monks of the Benedictine abbey fed labourers working there with bread, clotted cream and fruit preserves. Hundreds of years later, a variation of the dish, with scones replacing bread, was being served to the early tourists of the day who flocked to the region for its beaches and stunning coastline, and the tradition remains strong to this day. The popular dish causes extreme regional rivalry between neighbouring counties. Cornwall gained a PDO (protected designation of origin) for one of the central ingredients, their treasured clotted cream, while the dish itself is firmly established as the ‘Devonshire’ cream tea. The regional disharmony extends to how the dish should be eaten; in Cornwall the halved scone should be spread with jam (always strawberry) first and topped with cream, in Devon this order is reversed. Cream tea etiquette extends to the essential nature of clotted cream, not whipped, the type of scones, the flavour of preserve and whether the tea or the milk should be added to the cup first. In spite of these strictures, the dish spread internationally and can be commonly found in ex-colonies such as Australia and New Zealand, often with variations which would undoubtedly appal the Cornish and Devonians.

Launceston in Tasmania was named by the British authorities in the early 19th century in honour of the Governor of New South Wales of the time, who had been born in Launceston, Cornwall. With such a namesake, it would seem natural that Launceston, sitting upon the Tamar River, should be a provider of a quality cream tea. Several venues offer the dish but the place to go is Red Fox Vintage. An unassuming shop with a view of City Park, Red Fox is delightfully crammed with antique furniture, lamps, crockery & cutlery, tableware & kitchenware, clothing, accessories, and secondhand books. Chairs have been placed around the only four available horizontal surfaces and, amidst the sounds of cool jazz and lounge music, the proprietors, Sonja and Tanya, serve delicious homemade cakes and soup, teas, coffees and soft drinks. Their cream tea is a generous serving of two scones with plenty of jam and sumptuous cream, with a hot drink of your choice, all for $10. Even if you choose to replace the tea with coffee or hot chocolate, and regardless of whether it’s your cream or jam sitting atop your scone, you can sit back and relax in the surroundings of yesteryear and savour a long-enjoyed tradition.