In January, in Immigration: Those Closing the Doors Behind Themselves, I wrote about attitudes towards immigration, citizenship and nationhood, prompted by Trump’s insistence that Canadian-born Ted Cruz was not a ‘genuine’ US citizen. Trump has continued onwards with his rhetoric of exclusion: he has questioned a federal judge’s impartiality due to his heritage, calling him “Mexican” because of his parents’ place of birth despite the fact that he himself was born in Indiana; he has repeatedly called for bans on Muslims entering the US while advocating the monitoring and profiling of Muslims already in the country, US citizens; and only secondary to his “Make America Great Again” slogan, is one associated with ultra-nationalism, “America First”.

Such blatant xenophobia is closely echoed in the UK where a toxic pall of ugly nationalism hangs over the upcoming Brexit referendum. Thomas Mair, who killed Labour MP Jo Cox on the streets of her constituency last week, reportedly yelled “Britain First” as he committed the act and gave his name in court as “death to traitors, freedom for Britain”. Many of those in the Leave campaign and the public on the streets of the UK, when asked why they support the move to leave the EU, state that they “want the country back”. As James O’Brien asks in his much-viewed response to Jo Cox’s murder, “back from whom?”. What is it that people feel has been taken from them by the rest of Europe in the years since the country became part of the EU? And what do they think will be returned to them if the UK leave again?

People seem to be feeling a nostalgia for a pre-Globalisation world where the citizens of countries all held common values, borders were closed and each nation was self-sufficient, i.e.a world that has never existed. The ship has already sailed on isolationism and we live in a globally connected world where trade and business are conducted worldwide, borders are porous, migration commonplace and actions have international consequences. This has been the reality of our world for several hundred years now and it is a world more easily navigated through cooperation with other nations. However, in times of economic hardship it is easier to whip people into a flurry of fear and paranoia that what they have is going to be taken from them by ‘outsiders’, be they EU bureaucrats or Syrian refugees, and the media and politicians on both sides of the Atlantic have done a very efficient job of this since the Global Economic Crisis. 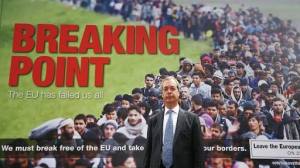 The results of the upcoming Brexit referendum and US Presidential election will tell us whether the fear-mongering of Nigel Farage’s UKIP and Donald Trump has succeeded or whether we want a society in which we use acceptance, openness and cooperation to solve our problems rather than a world of exclusion, restriction and fear of others.