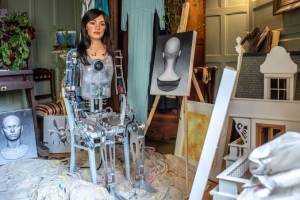 It’s a lucrative business model; a gallery owner makes millions selling art and can keep all the proceeds because he doesn’t have to pay the artist. At a time when creators are already struggling for fair remuneration for their work, is this the future? Meet Ai-Da, an AI robot developed by UK company Engineered Arts for gallery owner Aidan Meller. Using cameras in her eyes, Ai-Da is able to interact with her surroundings and produce original line drawings, and Meller has already made over $1 million selling her work. Yes, her work. Under her paint-smattered smock, Ai-Da’s body is all metallic parts, but her face is that of an attractive female (thanks to the team behind the ‘Westworld’ cyborgs) and she has a gentle, breathy voice to match. Named after 19th century mathematician and computing pioneer Ada Lovelace, the decision to make this technology female was deliberate. Meller says,“What we’re about today is really having everybody’s voice heard because that has not been traditional, especially in the art world. A female voice is needed more now than ever and we’re excited and proud of that.” There are so many questions raised by Ai-Da’s existence: Is it just a coincidence that Meller’s choice of name, supposedly honouring Ada Lovelace, is only one ‘n’ away from his own name, or is the self-aggrandisement deliberate?; Was Meller concerned about the optics of a successful, male gallery owner profiting from the work of an upcoming ‘female’ artist, or is exploitation the point?; Did Meller consider giving voice to a human female artist rather than to a robot, or did that never even cross his mind?

Which leads to the more general question of why so many of these, predominantly male-run, tech companies create ‘female’ robots. Putting aside the issue of specifically designed sexbots, there is an interesting discrepancy around which types of technology are presented as obvious robotics, such as Boston Dynamics’ dog-shaped and humanoid machines shown opening doors, climbing stairs and doing backflips, and those which are designed to look as human as possible, with skin and hair. The latter seem to frequently be female, with one such example being Sophia, who was developed by David Hansen of Hansen Robotics and modelled on Audrey Hepburn. Sophia was famously, and unironically, given citizenship in Saudi Arabia, a country where human women can’t work, study or travel without the permission of a male guardian. Hansen himself displayed an equally traditionalist view of the role of women in society when he explained that his aim is for Sophia to be of use in the healthcare, customer service, therapy and education sectors. It seems gender stereotypes are alive and well in the robot world, with ‘females’ performing the nurturing roles and the gentle arts best ‘suited’ to them.

We don’t need to dig deep into the psyches of such tech developers to find the sexual objectification of the female form together with a desire to create a breed of ‘women’ who can satisfy the need for attractive, sexy companions without the baggage of autonomy, opinions and the ability to say no. This seems to run parallel with a prudish distaste for anything that suggests female sexual desire and gratification. Last year’s case at CES (Consumer Electronics Show) highlighted the hypocrisy in this area, where sex tech to induce male pleasure had never been an issue but a female-targeted sex aid was deemed, “immoral, obscene, indecent, profane or not in keeping with CTA’s image“ by the Consumer Technology Association. This highlighted the misogynistic view that women are a means to male sexual pleasure, but that active female desire is unseemly and must be censored. The CTA have since reviewed what happened, explaining, “We just identified some inconsistency is in our handling and our policies that we needed to go back in and address,” The prize for the Osé Robotic Massager, which was revoked at the time, has now been reinstated, but the damage has been done and the image of tech as a protected male domain has been reinforced.

The sexual objectification of the female body is also the source of Facebook’s ongoing nipple issue. The company’s nudity moderation had resulted in works of art, historic photographs, content on breastfeeding and campaigns to raise awareness about breast cancer being removed from the platform. Users were also quick to point out the hypocrisy that female nipples were being banned but male nipples were deemed acceptable. Years on and Facebook are still trying to find a fix for their nipple problem, with their policies remaining opaque and questions being raised around how the company responds to images of trans-women and women after mastectomies. What it all points to is an inherent problem with their moderation, and with the algorithms being used to run it. These have been developed by men who see female breasts as merely sexual objects and who had not considered them in any other context. Their almost puritanical concealment of the female body shows that outdated but deep-seated, discriminatory ideas about the role of women in society are being transposed into the online world by powerful companies who are supposed to be at the forefront of the modern age.

Examples abound in the tech world of inequalities, sexual objectification and outright misogyny, from the low hiring rates of women and minorities to coordinated harassment by men who see tech as a male space and try to make it so uncomfortable and dangerous for women that they are forced out. All of this raises concerns over a general lack of diversity in the tech companies responsible for creating the world we increasingly live in. The algorithms which dictate so much of our online interactions today, from the recommendations and news we see to the moderation of content deemed inappropriate, are still predominantly written by white men, and the AI machine learning is based on content produced by even more white men. The danger is that the environment they create will share their views that women are nothing more than receptacles for their desires and not autonomous beings with an equal right to play an active role in that world.

Having recently returned from my second trip to Japan, I have frequently encountered the common perception amongst non-Japanese that the country remains at the forefront of efficient use of technology. During this visit, I was again struck by how far this is from the reality of the country: a place of fascinating contradictions which seems familiar while simultaneously defying expectations.

Rather than Japan being leaders in the use of electronic and digital technology to bolster efficiency, examples abound of underemployed staff members and paper-strewn computerless offices. In banks and public council offices, even in car hire companies, you are greeted by a helpful employee who tells you which queue to join or hands you a numbered slip for the waiting system; tasks performed elsewhere in the world by signs or paper dispensers. Once into the heart of such establishments you are struck by the lack of computer monitors on desks, at first assuming that tablets have been adopted, replacing their clunky, desk-cluttering predecessors. However, after being asked to complete and sign the numerous required forms, you realise that the majority of administrative tasks are still paper-based. It is not unusual in banks to see white-gloved employees transporting cash from one department to another on little metal trays, while expecting to be able to pay for goods and services by credit card remains a game of Russian Roulette. Overseas visitors may find this all results in frustratingly inefficient and time-consuming encounters but the locals are accustomed to it and take it all in their stride, gripe-free.

Part of the explanation seems to be a simple case of job creation; with a population of 127 million people, Japan has a relatively low unemployment rate of around 3.5%. In spite of Japanese scientists’ work in the field of robotics, people have not been replaced by machines, as the country attempts to provide jobs for as much of the population as possible. This results in a staff member on every floor of multi-level car parks to usher you to a vacant spot and workers who direct traffic around roadworks, even at 2am, at points where there are already temporary traffic lights. Although having never officially been classed as a Communist country, there is much about Japan which feels familiar to anyone who has been in Russia, China or former Soviet countries: the concrete apartment blocks, the transport system timed to the second, the school children being drilled for mass games and the public announcement systems present in even the smallest of hamlets. This focus on the combined welfare of the population has been combined with, what some have speculated as, a distrust of the digital world. In the 1980s, through companies such as Sony and Panasonic, Japan was at the forefront of electronic technology, providing the world with its first walkman, laptop, VHS recorder, solar cells and LCD screen. Now though, in spite of one of the world’s highest R&D budgets, examples of innovation are harder to come by and their tech firms seem to have missed the boat in the digital arena, falling far behind companies like Apple and Samsung. While people in Japan have access to high-speed broadband, less than 40% of the population use it regularly, people are not taking up online commerce at the same rate as other countries and the development of website design seems slow, with sites being unwieldy and lacking in useful information. Some Japanese friends have speculated that the Japanese government, one accustomed to unchallenged authority, prefers that the population don’t have easy, unfettered access to the range of information and outside influence that the Internet provides. This theory could be supported by the Japanese education ministry’s refusal of Apple’s 1996 offer to provide computers for the country’s schools.

In many ways Japan feels frozen in the 1980s. Since the economic bubble burst in 1989, they have managed to keep their economy afloat and employ their ageing population but much of the country’s infrastructure now feels tired and worn. At the height of the entrepreneurial spirit of the 80s boom, coastal areas became littered with luxury hotels and spa facilities. Barely at the end of the summer season, these edifices now stand empty and shut up, contributing to the feeling of faded glory *. Meanwhile, areas associated with the bling and vibrance of Japan, such as the tourist-draw of Shinjuku in Tokyo, have an almost retro feel to them now, being places of nostalgia for a Japan that only really existed for a decade, no longer at the forefront of the modern age.

Remnants of the country’s technological past achievements still remain impressive, most notably the Shinkansen trains, which whisk people from city to city in complete comfort, their 300kmph motion virtually imperceptible from inside. However, the overwhelming impression the country gives is of one now content to exist apart from developments happening elsewhere in order to maintain a status quo. Perhaps, just as it did during the Sakoku (locked country) period from the 17th to 19th centuries, it is an attempt to circumvent excessive outside influence while doing what it can to survive the choppy seas of international economics and protect its own population.

* (As an aside and a suggestion for anyone intending to travel to Japan, the coastal town of Toba in Mie prefecture, home to an aquarium and the Mikimoto pearl farm, provided the most mouthwateringly delicious, melt-in-the-mouth fish and seafood I have ever had. The Kaigetsu Ryokan, with its friendly hospitality and wonderful breakfasts, is highly recommended).

I shall let the video and article speak for themselves this week. This is thoroughly impressive technology (although it’s a little unfortunate that the equipment shares it’s name with the homicidal sentient computer in Stanley Kubrick’s 2001: A Space Odyssey and the company with that of the corporation who brings about Armageddon with their creation of AI in the Terminator franchise).